What Happens After a Settlement Offer? - JT Legal Group

What Happens After a Settlement Offer?

After you accept a settlement offer, you could receive your money in about six weeks. It all depends on how long it takes to complete each portion of the claims process.

How Does the Claims Process Work?

The insurance adjuster investigates the accident in the following manner:

After an accident, the injured party files a claim against the at-fault party’s insurance coverage. Then, an insurance adjuster investigates the case. The first person the adjuster will interview will be the at-fault driver. The adjuster also reviews the police reports for the purpose of determining exactly how the accident occurred.

It is also the insurance adjuster’s job to investigate the injured party. One thing that the adjuster will want to know is whether or not you have filed any personal injury claims in the past. The adjuster also takes the opportunity to examine your social media presence with the hope that he or she can find something that will damage your credibility.

If you have been injured in a car collision, you must hire a California PI attorney. After you do this, the insurance adjuster will contact your personal injury attorney for the purpose of obtaining the documents that relate to your accident. These documents include your medical bills, proof of the damage to your vehicle, tax returns and your paycheck stubs. The adjuster will examine this documentation to see if he or she can find evidence that you are not really as injured as you claim to be.

How Much Is the Case Worth?

The insurance adjuster gathers enough documentation to make an estimate as to how much the case is worth. The first thing that the insurance adjuster wants to know is whether or not the claimant could possibly win if he or she files a personal injury lawsuit. Then, he or she will ask how much money the plaintiff might win. The adjuster will add up the bills to determine how much the plaintiff may receive for medical bills and lost wages. The adjuster will also estimate an amount of money for pain and suffering by using software programs.

The insurance adjuster will be prepared to present a settlement offer after the investigation leads him or her to a monetary number. If the claimant does not have a California PI attorney, this number will, most likely, be very low.

After the Case Settles

Documents the claimant must sign after accepting a settlement offer include the following:

The Settlement Agreement: The settlement agreement lists the terms of the agreement, including the amount of money for which the claimant settled the claim. It may also list any confidentiality agreements and payment plans associated with the case.

Do You Receive Compensation Right Away after Settling a Claim?

After you agree to accept the settlement offer, the at-fault driver’s insurance company will give your California PI attorney a check that your attorney will deposit in his or her trust account. After the funds clear the bank, the personal injury attorney can begin to disburse the funds. 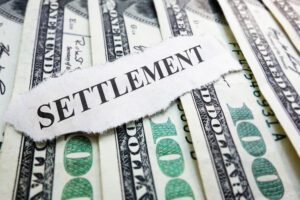 Settling after a Lawsuit Has Been Filed

The case may also settle after a personal injury lawsuit has been filed. If this occurs, the defendant’s attorney and the personal injury attorney must inform the court that the two sides have reached an agreement. Each side needs to complete settlement papers, and they will have between 30 and 60 days to do this.

The at-fault driver’s attorney must prepare the release and send it to the injured party’s attorney. The California PI attorney will carefully examine this document to ensure that it doesn’t contain any objectionable language. When the plaintiff’s attorney believes that some of the language is unacceptable for any reason, several days may pass before both sides can reach an agreement. If they cannot do this, they will inform the judge, and the judge will help the two come to an agreement. If this occurs, it will increase the amount of time that it takes for the injured party to receive his or her settlement.

The plaintiff’s attorney will disburse the funds in the following order:

After the release has been signed, the plaintiff’s attorney can begin to disburse the funds. The first people to be paid will be those holding medical liens or governmental liens. The plaintiff may have made an agreement with his or her medical providers to receive payment for medical treatment after the lawsuit settles. To do this, the plaintiff needed to sign a “lien” so that the medical provider could be paid with the settlement money. The plaintiff may also have government liens with a child support agency, Medicare or Medicaid. After the liens have been paid, the plaintiff’s attorney can pay the property repair bills and give the plaintiff his or her portion of the settlement money.

The next to receive payment would be the entity that is repairing the plaintiff’s vehicle. The attorney would have already collected the invoices for the work that was done on the plaintiff’s car. At this point, the vehicle should not need any further repairs. If this is the case, the personal injury attorney will verify the final amounts and pay these bills next.

The attorney gets paid after all of the other bills have been paid. If the case went to court, the court costs and filing fees will be paid at this time too. The plaintiff may receive an itemized list of the costs that the attorney paid and then the attorney will pay the legal costs and the attorney’s fee.

Is There a Waiting Period?

There isn’t a set waiting period, but it may take several weeks before the entire process ends so that the plaintiff can receive his or her payment. That depends on how many clients the attorney has to attend to at the same time, but a claimant can expect payment to come in about six weeks.

An Appeal after Winning a Lawsuit

If the plaintiff wins a personal injury lawsuit, the defendant will probably appeal, and appeals cause the process to last a year or longer. The appeals court will have the discretion to do one of three following things:

In the event that the appeals court upholds the verdict or reverses it, the plaintiff or the defendant will have the right to appeal the verdict in a higher court. The higher court may uphold or reverse the verdict or send it back to the trial court so that a new trial can take place. If the higher court orders the trial court to retry the case, the plaintiff will be forced to endure a second trial. After the verdict, either side has the right to appeal this verdict as well. Most cases end with a settlement to avoid situations such as these.

Get Your Free and Confidential Consultation

Gain a clear understanding of your legal options. Our successful legal team will carefully review your situation and give you all the information you need. Contact us today !