Whiplash injuries are among the most common types of personal injury people might suffer in motor vehicle collisions. Researchers report that these injuries account for 75% of all accident-related injuries. These types of injuries are especially common in rear-end collisions when passengers and drivers in the front vehicles are violently propelled forward and then backward during the force of the collision and its aftermath.

The sudden acceleration and deceleration involved with a rear-end collision can cause a victim’s head and neck to hyperextend as it returns backward following the forward propulsion. The back-and-forth movement can cause damage to the soft tissues of the neck and shoulders, including the ligaments, tendons, and muscles.

While this type of injury is common in car crashes, many people do not understand it, and some discount others’ reports of their symptoms. However, whiplash-related symptoms can range in severity, and some people with these types of injuries will develop chronic whiplash-associated disorders that can last for months or years.

Whiplash-associated injuries can occur when a victim’s head and neck are violently propelled forward before moving backward as the force of a collision subsides. Its name is derived because the movement is similar to cracking a whip. The sudden movement can cause the muscles, tendons, and ligaments of the neck to hyperextend, resulting in tears, inflammation, sprains, and strains. While most cases can resolve in a few weeks, some people suffer ongoing symptoms that can last for months or even years. Whiplash-associated disorders can be debilitating and interfere with the victim’s ability to perform the routine activities of daily life and can also result in psychological and emotional harm.

One issue with whiplash-related injuries is that the symptoms can be delayed following a car crash. When people are involved in transportation accidents, their systems naturally are flooded with adrenaline as a component of the natural fight-or-flight response to perceived danger. Some people might also experience shock following a collision. The combination of adrenaline and shock can mask injury symptoms for hours up to a few days, so some people are initially unaware that they have been injured in the immediate aftermath of their collisions.

Some of the most common symptoms of of this type of personal injury include the following:

The acute stage lasts for up to three weeks following the injury. In most cases, conservative treatment during the acute and subacute stages will result in the symptoms subsiding and disappearing. However, when the symptoms and whiplash-associated disorders persist for longer than three months, they can become chronic.

In addition to the common symptoms described above, the following whiplash-associated disorders can also occur:

Whiplash-associated disorders and symptoms are graded from zero to four according to the scale developed by the Quebec Task Force as follows:

Most patients who are diagnosed with whiplash-related injuries and disorders are classified with grade two injuries.

When accident victims seek medical care following their collisions, the doctors will initially review their medical history and ask about their symptoms, including any neck pain they might be experiencing. Medical professionals will also ask about the nature of the accident and its severity.

The doctor will then perform a physical examination, including observing the patient’s posture and neck, palpitating the neck and muscles to check for tenderness, and testing the range of motion of the victim’s neck. If the patient reports sensory or neurological symptoms, the doctor might also check his or her reflexes and muscle strength.

Following the physical examination, a doctor might order diagnostic imaging tests if a fracture or dislocation is suspected. Some of the tests that might be ordered include the following:

Following the medical history, physical examination, and any diagnostic imaging tests, the doctor will then create a treatment plan and make recommendations for any needed follow-up care. 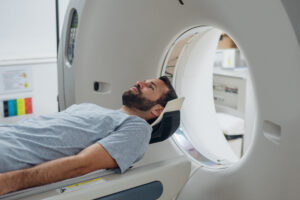 The recommended treatment can vary based on the severity of the symptoms and associated disorders. Doctors might recommend self-care measures to people with mild or moderate cases. Some of these at-home treatments might include the following:

While cervical collars used to be commonly recommended, many doctors no longer do because they can exacerbate weakness of the neck muscles.

For people with severe injuries and those for whom the symptoms do not subside, medical intervention might be necessary. A combination of some of the following types of treatment might be recommended:

Lifestyle changes might also be recommended, including making more nutritious food choices, getting more exercise, cessation of smoking, and others.

While most people will fully recover from whiplash-related injuries in three months or less, some people develop chronic symptoms that can affect them for months or years. Chronic whiplash-associated disorders are associated with certain risk factors, including the following:

Some people with chronic whiplash-associated disorders might suffer from chronic headaches, persistent pain, limited mobility of the neck and head, and anxiety or depression. Chronic symptoms can greatly interfere with the victim’s ability to perform routine tasks and participate in activities that he or she previously enjoyed.

Even when people are unsure whether they have been injured following a car accident, they should still seek immediate medical attention. Getting prompt medical care and a proper diagnosis might help to facilitate a victim’s recovery and prevent the symptoms from worsening. When people are diagnosed with whiplash-associated disorders following a collision caused by the negligence of someone else, they should consult an experienced personal injury attorney as soon as possible about their legal options. Car accident victims whose injuries were caused by the negligence of someone else might be entitled to pursue compensation through a legal claim.