The Long-Term Effects of Catastrophic Injuries

The JT Legal Group handles a wide range of personal injury claims, including claims where the injuries suffered by the plaintiff were catastrophic. Catastrophic injuries are typically defined as sudden, unexpected injuries with serious and long-term, or perhaps permanent, consequences for the victim. The following can be catastrophic:

Another catastrophic injury, though it does not count as a sudden injury, is the development of a disease from long-term exposure to dangerous substances: for instance, lung cancer from exposure to asbestos, a mineral found in many old building materials.

If you or a loved one suffered catastrophic injuries through another’s negligence, you will want to learn more through a personal injury attorney. Below, though, you will find out what the long-term effects of the most common catastrophic injuries are. As you might expect, the effects will naturally differ based on what part of the body was affected.

Arguably the most widespread catastrophic injury is the traumatic brain injury. This refers to any injury that the brain incurs due to a blow, a bump, shaking, or another violent movement. Despite the word “traumatic,” not all TBIs are severe; medical experts do speak of mild and moderate TBIs. The mild TBI, better known as a concussion, affects the brain temporarily and rarely for the long term: one to two weeks, at the most. However, it’s worth noting some of the possible symptoms:

Now, if this is what can happen with a mild TBI, one can only imagine what a severe TBI would result in. Victims may fall into a coma. They may suffer permanent memory loss. Thinking, learning, balance, coordination, and speech may also become impaired. The emotional side cannot be ignored either. Victims may become clinically depressed and withdraw from society. It’s not unusual for some to take up drugs and misuse alcohol.

The CDC has found that victims of a moderate or severe TBI generally shorten their life expectancy by nine years. Among moderate and severe sufferers who have lived at least five years after the injury, 57% are disabled. Here were some of the CDC’s other findings:

The spinal cord, a column of nerves connecting the brain to the rest of the body, can be divided into four sections with the uppermost section being called the cervical, followed by the thoracic, lumbar, and sacral region. The higher the section that’s injured, the more severe the injury. One term that medical experts use is the “completeness” of a spinal injury. A complete injury results in paraplegia, or the loss of all sensory and motor function. An incomplete spinal cord injury may result in quadriplegia, or a partial paralysis of the limbs and affected organs. Besides loss of movement and feeling, effects could include:

Neurogenic shock, in particular, is life-threatening and requires immediate medical attention. It’s a condition caused by irregular blood circulation and results in a dramatic drop in blood pressure, hypothermia, and physical weakness.

Some spinal cord injury victims experience intense and chronic pain in those parts of their body that are supposedly without sensory function. This is known as neuropathic pain and is based on a “miscommunication” between the brain and the damaged nerves. Then there’s the musculoskeletal pain that victims may suffer indirectly: for example, from prolonged sitting in a wheelchair. As with any other catastrophic personal injury, there’s the possibility of emotional distress arising. 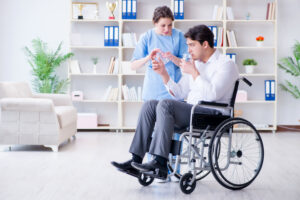 You may be familiar with the classification of burns into four degrees. First-degree burns are usually nothing to worry about while second-degree burns can result in red skin and blistering. The catastrophic kind, though, are third- and fourth-degree burns, which destroy both the epidermis, or the outer layer of skin, and the dermis underneath it. Fourth-degree burns can affect the bone, muscles, and tendons as well. In any event, once the epidermis and the hair follicles are destroyed, no new skin can grow. The skin will appear blackened and charred or unusually white.

Such permanent disfigurement can easily contribute to emotional pain and suffering as anxiety about one’s self-image will naturally arise. The physical pain can be excruciating, too. In some cases, burns can destroy sweat glands, which will trigger a rise in body temperature and, thus, a permanent inability to engage in physically demanding activities. Once recovered, burn victims may still suffer due to the heightened sensitivity of their scarred skin to tearing, sunburns, and infection.

Most fractured bones heal smoothly enough and therefore cannot be considered catastrophic. There are exceptions, though. By not healing properly, fractures can restrict the victim’s mobility, affecting his or her quality of life and ability to earn a living. Compound fractures, because they pierce through the victim’s skin, can open the way to infection, which may mean the amputation of a limb. Comminuted fractures, where a bone breaks into three or more pieces, are notorious for not healing properly.

Also note that fractures among children can count as catastrophic in one specific instance: namely, when they affect the growth plate, which is the growing tissue at the end of a child’s bones. Growth plate fractures can result in deformity with one limb eventually becoming shorter than the other.

Through malpractice, babies may be injured during the birth and delivery process. For example, excessive force during delivery can fracture a baby’s bones, causing deformation. A rare emergency called shoulder dystocia, where a baby’s shoulder becomes stuck above the mother’s pelvic bone, can lead to trauma and damage to the brachial plexus, where the nerves for the shoulders, arms, and hands are located. Paralysis can be one long-term effect, then.

A baby who has oxygen flow cut off to the brain may suffer brain damage and develop cerebral palsy, a disorder that impairs body and muscle movement. Mild cerebral palsy will cause awkwardness in a child’s posture and walk. More serious forms may put the child in a wheelchair. Also associated with severe cerebral palsy are lifelong speech, vision, and hearing impairments; scoliosis, or a sideways curving of the spine; and intellectual disabilities.

The Financial Impact of Catastrophic Injuries

The physical and emotional consequences of a catastrophic injury should now be clear. Still, one must reckon the financial impact, especially if one intends to file a personal injury claim. There would be the cost of:

Those medications can range from antibiotics for infections arising from fractures to psychiatric drugs used to treat depression, anxiety, and post-traumatic stress disorder (which can grow out of especially traumatic incidents). In addition, a claim could reasonably include the transportation costs when the victim must undergo multiple treatments months or years after the incident.

A claim can also cover the cost of medical equipment like wheelchairs. If you must make modifications to your home to accommodate a wheelchair, you can request reimbursement for these as well. If others depended on you for transportation, then the cost of any transportation services they receive may also be covered. Those who require custom in-home care may qualify for compensation.

Next, there’s the loss that victims and their dependents experience when the former are rendered unable to work or at least work at the same capacity as before. Calculating lost income, past, present, and future, depends on factors like age, life expectancy, overall health, and job skills.

Catastrophic injuries can emerge from any kinds of circumstances. Collisions between passenger vehicles and 18-wheelers are a leading cause of TBIs, for instance, while explosions at chemical plants account for a great number of catastrophic burn cases. Falls on construction sites are to blame for many back and spine injuries, and a negligent surgeon may damage nerves to a catastrophic degree. Even the failure to do something, as in the case of a misdiagnosis, can aggravate a condition to the point that it causes irreparable harm. Then there are times when intentional acts of violence are behind an injury.

Whatever the situation you or your loved one is going through, know that the JT Legal Group is here to protect your rights. Call today for a free, no-obligation consultation with our personal injury team.