The tragic helicopter crash that took one of NBA’s most valuable players along with 8 other people catapulted lawmakers to take swift action when photographs of the crash site were leaked.

We live in a time where the majority of news is spread across social media platforms quicker than we have time to process. Cell phone technology has allowed things to be shared within seconds by just the click of a button. While modern technology serves its purpose, it can also have a negative impact on many people.

Photos and videos are often posted and shared online that are insensitive to others. For example, an individual may see a viral video of their loved one being killed in a car accident before police have even had the chance to notify them. While the original person who posted it can delete the video, it may have already been shared and re-posted thousands of times, making it impossible to unsee.

In order to prevent the public from witnessing or interacting with such events of disaster and death, first responders are called to preserve and secure the scene. Just as the dignity of a deceased person must be protected, so must the privacy of their loved ones.

An invasion of privacy bill was recently passed in California which was established due to leaked photos of the helicopter crash that killed basketball legend Kobe Bryant. Under this new law, first responders would be prohibited from sharing photos of any crime or accident scene unless doing so for investigation purposes.

Why the Bill was Established

This bill was first brought to light following a citizen’s complaint of the gruesome photos that were shared at a bar in Norwalk. Ralph Mendez was at the Baja California Bar & Grill when he was shown the photos of the deceased victims of the crash. After leaving the bar, he filed a complaint with the department on January 29th.

While the Sheriff’s Deputy office attempted to cover up these actions by deleting the photos, the information was quickly disclosed to the public by the Los Angeles Times. This prompted an investigation by Sheriff Alex Villanueva and Mendez was interviewed in March by the Sheriff’s Internal Affairs Bureau.

A lawsuit was also filed on Vanessa Bryant’s behalf against the Sheriff’s Department for negligence, invasion of privacy, and intentional infliction of emotional distress. 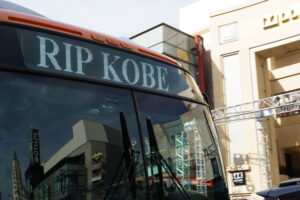 What Was the Law Before this Bill Passed?

Prior to Assembly Bill No. 2655 being passed, the old law prohibited reproduction of photos of a body at a crime or accident scene taken by a coroner. There was no law made, however, that prohibited law enforcement officers, firefighters, coroner officials, or ambulance crews from taking and sharing photos.

Who is Considered a First Responder?

The new invasion of privacy law would make it a misdemeanor for a first responder to take photos of a deceased person for reasons other than investigation purposes or a genuine public interest. Any first responder who is found guilty of this crime can also be fined up to $1,000.

If it is suspected that a first responder has engaged in the crime, the bill also authorizes a search warrant to be issued for personal electronic devices that prove the first responder is guilty.

Photography is a typical example of The First Amendment which guarantees all citizens the right to freedom of speech and association. Through photography people are able to express themselves which is why this bill creates a limitation to the First Amendment.

This bill, however, prohibits photography only in specific circumstances. The government is entitled to force a content-based regulation of speech as long as it satisfies the strict scrutiny standard. In other words, the law must “serve a compelling state interest,” and must ensure that “no less speech-restrictive means exist to achieve the interest.” Lawmakers have created this bill to specifically address a certain class of people who hold a status of public trust. Private individuals are not affected by this bill.

If you or a loved one falls victim to this crime in the event of a personal injury accident, or wrongful death, you are entitled to file a lawsuit. Our attorneys at JT Legal Group have a combined experience of over 100 years and will help properly assess your case. Here at the firm we Don’t Settle For Less, and will ensure you receive maximum compensation for your losses.