Determining Liability After a Car Accident

After you have been involved in a car accident and have contacted the police, the first thing you need to do is make sure that you receive medical assistance for any injuries that you might have. Once police officers arrive at the scene of the accident, they will take your statement and will essentially perform an on-site investigation over how the accident occurred and who might have caused it.

In the event that you’ve been injured in an accident, you may be able to obtain compensation by filing an insurance claim or personal injury lawsuit. However, a legal action of any kind will require proving that someone else was liable for your accident. Before your case goes forward, it’s highly recommended that you know how liability is determined in California and who is involved in making this decision.

When you’re in a car accident and want to file a California PI lawsuit, you should know that California is considered to be an at-fault state, which means that the person who is deemed to be at fault for the accident will be tasked with paying the injured person’s compensation claims. The exact amount of compensation that you could receive following an accident depends on the extent of your injuries as well as how negligent the at-fault individual was.

In most cases, the insurance company that represents the at-fault driver will be required to cover any compensation that’s awarded to you. It’s possible that the insurance company will make a low settlement offer, which is when the injured driver could decide to file a personal injury lawsuit to increase their chances of obtaining a higher amount of compensation. If you believe that filing a lawsuit is necessary for your case, you could hire our California attorney. Once you retain our services, we will investigate the accident and gather evidence to help prove the other driver was at fault.

There are many different things that could be used to prove fault following a car accident. For instance, one of the drivers might admit that they were at fault at the scene of the accident. It’s also possible that the police report would allow personal injury attorneys to gain a better understanding of who was at fault for the accident in question. Determining fault is the most consequential aspect of any California PI case, which is why it’s important to understand exactly how fault is determined.

A Driver Could Determine Fault

Although unlikely, it’s possible that one of the drivers involved in the accident would admit that they were at fault. Getting into an accident of any severity can make for a highly stressful and frightening experience. In the immediate aftermath of an accident, some people will start pointing fingers at others regarding who was at fault. Because of the pressure that invariably occurs in this situation, the person who is being blamed for the accident might admit to being at fault.

It’s important to understand, however, that this is a mistake. In the heat of the moment, you could believe that you were at fault for the accident even if the other driver was the one who made an error. Instead of being overly forthcoming after being involved in an accident, it’s recommended that you take pictures of the damaged vehicles, search for witnesses who can give statements, and document the weather conditions, accident location, and time of day. All of this information could prove beneficial when fault is being determined by an insurance provider or judge.

A Police Report Could Determine Fault 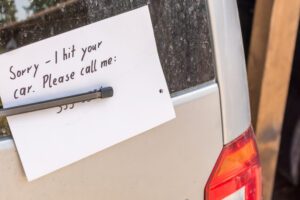 All of the information that the police officer gathers is placed into a police report, which is an essential document for future personal injury claims and lawsuits. The police officer will note how damaged any vehicles are and identify where the damage is located on the vehicles in question. If the damage to one car is situated almost entirely in the rear of the vehicle, this could indicate that the other vehicle ran into the back of the car. The person at fault for a rear-end collision is usually the driver who ran into the back of the other vehicle.

Police reports often contain diagrams and drawings that the police officer makes to better display how they believe the accident occurred. The police officer will also speak to any witnesses and gather statements that may prove useful in the event that the other driver was driving under the influence or was on the phone at the time of the accident. Even though police reports for accidents aren’t always error-free, they are commonly used by insurance companies, which is why you should grab a copy of the report as soon as it’s available. 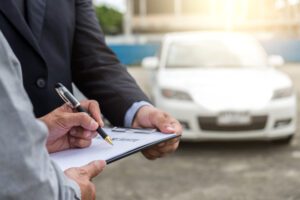 Most personal injury cases begin by filing an insurance claim with the other driver’s insurance company. Insurance claims are very easy to file and can typically be filled out online or over the phone. In certain situations, an online algorithm will use the information that you input into the online claim to determine what your amount of compensation should be. These algorithms can also identify who was at fault for the accident based on your information as well as the info placed in the police report.

While it’s possible for insurance companies to determine who was at fault for an accident without any outside input, many insurers seek to resolve the issue by sending the claim to Arbitration Forums Inc., which is a private company that determines how much damaged occurred and who is required to pay. The arbitration process is designed to keep California PI lawsuits at a minimum. Keep in mind that arbitration typically occurs electronically.

A Jury Could Determine Fault

In the event that you file a lawsuit and go to court, a jury may determine fault if the other driver’s insurance company doesn’t settle. While it’s possible for a personal injury lawsuit to be decided by a jury, the vast majority of these cases are settled before ever reaching this point. If your case goes before a jury, multiple people will be tasked with taking a look at all of the evidence gathered to determine who was at fault. When a case gets to this point, the plaintiff must have a California attorney by their side who can best represent their case in front of a jury.

How Negligence Is Proven

When you are involved in a car accident and want to determine that the other driver was at fault, you will need to prove that the other driver was negligent and made a mistake that caused the accident. When you retain the services of our personal injury attorney, we can help you prove negligence by conducting an accident investigation and by looking at all of the information in the police report and any information you gathered. The four distinct elements that are needed to prove another driver was negligent include:

If you have recently been in a car accident and would like to seek compensation for any injuries you’ve suffered from, call our personal injury attorney immediately to schedule your first consultation. During this consultation, we’ll help you explore all of your legal options and determine the best step forward.

Get Your Free and Confidential Consultation

Gain a clear understanding of your legal options. Our successful legal team will carefully review your situation and give you all the information you need. Contact us today !